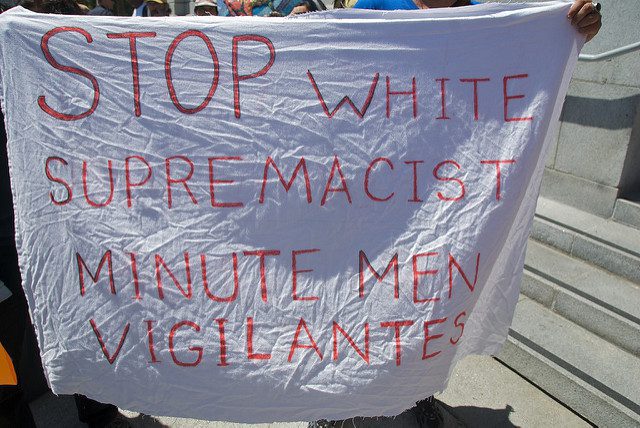 Last month, a viral video depicting New York lawyer Aaron Schlossberg’s racist rant against two Spanish speaking employees in a Manhattan deli seems to have left many shocked. Not me though, if anything it reminded me of a somewhat similar incident I experienced in New York City years ago.

In 2010, a friend and I were riding the subway late at night when a visibly drunk white man entered the train and walked up to where we were sitting. Addressing my friend, who was black, he began telling him that he looked like a monkey and quickly started to get physically aggressive but was eventually subdued by police at the next stop.

These sorts of incidents are not particularly unique to the era of Trump, but they are so much more visible thanks to ubiquity of cell phones and social media. In a country founded through slavery and genocide, racism is part of that shameful legacy. Yet since Trump’s election, there has been newfound attention to these routine incidents of hate and aggression in American culture, specifically we have seen widespread coverage of cases involving white people calling police as a tool to enforce their dominance over people of color.

Recently a woman was turned into the internet’s most popular meme when she decided that her best use of time was to call the police on black folks that were having a cookout in a public park. In another instance, a viral clip showed two Philadelphia black men arrested at a Starbucks for simply sitting in the store. At Yale University, a black woman was detained by cops after being reported for sleeping in the dorm’s common room. Three black women, one of whom is Bob Marley’s granddaughter, were held up by police after being mistaken for burglars while leaving their Airbnb.

Cops have shot and killed 400 people since the beginning of 2018, including a notorious recent case in which a black unarmed man was shot in his own backyard when the iPhone in his hand was allegedly mistaken for a gun. These cases have gotten coverage in the news and have been documented through social media, suggesting that the knowledge that there is a high probability that these encounters with law enforcement will end with a fatality is not a deterrent for those calling the police in this manner.

As people in this country (and around the world) continue to redefine what liberation truly means and make demands regarding their quality of life and equity of treatment within society, white supremacy is pushing back against these demands. Sometimes the white lash is at the macro level, such as the election of a racist president or the massacre of Palestinians peacefully protesting by Israeli soldiers. Most of the time, however, these microaggressions exist and occur in our daily lives – whether it is at our universities, parks, or coffee shops – systems of oppression are exploited by people who feel threatened by a changing society to exert dominance on those who they feel threatened by.

The upside to all this is that social media and other tools have been instrumental in exposing and holding accountable people who engage in these racist and oppressive behaviors. Racist lawyer Aaron Schlossberg was kicked out of his office space and faces a complaint from two elected officials to a disciplinary committee that oversees lawyers in the state of New York.

Unfortunately, the highest levels of government in what is arguably the most powerful country in the world, are currently occupied by white supremacists with Donald Trump in the Presidency. Until he and others under him are swept out of office and held accountable, it will be very difficult to meaningfully address the racism and bigotry that is so prevalent in our society.