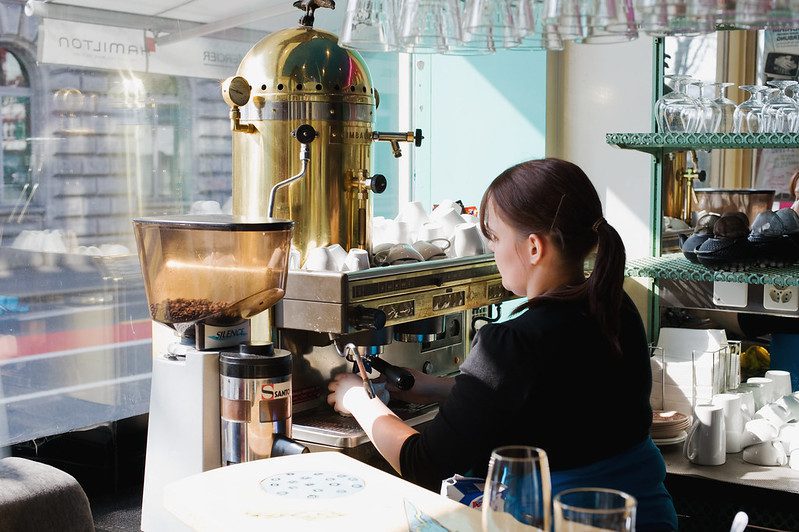 Back in my early 20s, I proudly wore the job title of “coffee girl.”

I had five years of experience by the time I was 22, working full-time at a busy shop in Fairbanks, Alaska where employees were hired by inner circle methods and not applications. During an 8-hour shift, it was common to get a few resumes, handed over the counter from shy college students. We took them without an encouraging word and silently placed them in the folder under the cash register.

Every so often, my boss would look through the folder and make a huge display about flipping through it before he held it up and proclaimed that any one of us could easily be replaced. He said this when one of us complained, too, adding that he had a pile of people lining up to take our job if we didn’t like it. I knew with certainty from that proclamation, and really for the next 20 years, that I, an hourly-wage employee, could be summed up in two words: Replaceable and disposable.

This has been made painfully clear by protesters lining up along roads and in front of state capitals who are anti stay-at-home amid the COVID-19 outbreak. Demands to return to work might be heard, but the resounding upset is held in an inability to shop for items and services that states have listed as non-essential. Protesters might chant “We want to work,” but what they’re really saying is “we want others to go back to work for us.”

An illustration of what workers they are missing can be seen in who among the 22 million filed for unemployment insurance. The Bureau of Labor Statistics reported that of the 701,000 jobs lost in March, 459,000 of those were in leisure and hospitality sectors. In a report by The Fuller Project for those same weeks, in Minnesota, New Jersey, and Virginia, nearly two thirds of new unemployment claims were made by women. Historically, the service industry is largely made up of people of color: 12.2% are white women and only 9.6% are men.

When I was 31, I worked full-time as a house cleaner while I raised my then three-year-old daughter alone. One morning, I had to call in sick because my daughter was too ill to bring to daycare, and my boss at the time sighed. “This is the second time in a row that you’ve had to cancel on this client’s monthly clean,” she said. “I think she will ask for a different cleaner if you don’t find a way to make it work somehow.”

Being unreliable as an hourly-wage worker was the biggest fault to have. Calling in sick was a last resort, and often earned you a flag for future termination. Workers like I was—the service industry and care workers who invisibly clean up after us by the dozens in a pre-pandemic day—tirelessly show up because they have no choice, and they do it without sick leave, vacation pay, or health insurance. Hourly wage workers are not only our most vulnerable individuals in society, they are our most underappreciated by employers and the general public alike. Yet they are the most indispensable. Instead of protesting to return to work, they are struggling to feed their families.

While middle-class business owners protest for freedom to see a movie, the people who’d be selling them the popcorn are going hungry. In many states, lines for food banks are hours long while organizations struggle to keep up with demand. A rush back to work would put them at risk of being deathly ill from coronavirus without health insurance or losing their job indefinitely simply because of the disposable of their position, no matter how “essential” it might be.

“Dog groomers are essential workers because dogs are suffering,” one woman in Lansing, Michigan said before pointing to a sign with a photograph of her shih tzu.

At other protests, retirees tearfully complain about not being able to buy paint, and another, from the passenger seat of her car, says, “We’re tired of not being able to buy the things we need.” She then tilts her head down to show an inch of gray roots and adds “like go to the hair dressers and get our hair done.”

These Astroturf protests organized by rightwing groups have other things in common: The majority are white business owners and retirees, driving around in notably nice vehicles. Missing are the hourly-wage workers—like the cashiers who’d sell them paint, for example. Why? Because that line of work doesn’t allow you to save money. Once their wages stopped, money for housing and food disappeared.

We need bold solutions for all families

That’s why we need to find real solutions to help families when they need it most, making sure that people get a universal basic income and paid leave and we stop the stem of job losses. And for goodness sake, Congress needs to fund child care because guess what? If parents don’t have child care, the economy won’t re-open.

That image of the stack of resumes became my inner symbol of job insecurity. I thought of it whenever I debated whether or not to call in sick, request a day off, or ask for a raise. It was rare for an employer to invest in me through any sort of benefit beyond the ability to bring home a paycheck for the time that I worked, rounded up or down to the nearest quarter hour. Each and every minute of paid work mattered. I couldn’t survive without it.

When protesters hold up signs saying “Give me Liberty of Give me Death” what they’re really wanting is others—the people who would wait on them, clean up after them, and care for their children—to die for them.

Stephanie Land
Bio: Stephanie Land is the author of “MAID: Hard Work, Low Pay, and a Mother’s Will to Survive.” She lives in Missoula, Montana. Twitter: @stepville