It’s time to talk about reparations 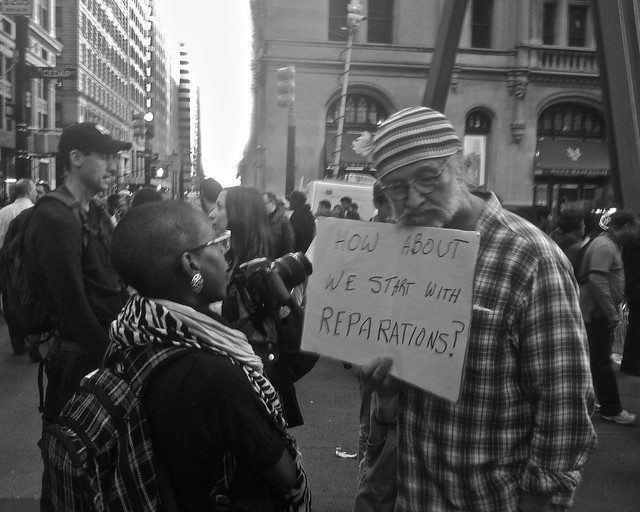 The idea of reparations are back in the news with the 2020 Democratic candidates, raising the issue of offering some form of payment to black Americans for the horrors inflicted by slavery and the lasting legacy of disenfranchisement they have endured more more than a century after the institution ended.

I certainly  support reparations. But I have never been sure how those reparations should be made.

I can list a few forms of reparation I easily support. I strongly support affirmative action in the form of enhanced hiring and training and commitment to build the leadership of black Americans. I support affirmative action  in college education admissions that grows the number of black students on campuses. Ultimately, higher education and good paying jobs advance the ability of black people to thrive. I strongly support programs which encourage black home ownership, and funding that sets aside a certain number of government contracts go to black businesses.

In the past few months, several Democratic candidates have grown bolder, and emerged in public forums stating that they give total the ideological support to African American reparations. They have so far tied their words to policy proposals which raised income levels, provided living wages, or expanded affordable housing, tying their support to a real push for poverty reduction.

The proposal which had dealt most specifically with the matter may be Elizabeth Warren’s pitch for a congressional committee to study a framework for reparations to Native Americans and Black Americans,  studying how to ameliorate the hurt they sustained from the legacies of American expansionism and slavery. Warren believes this would be the best way to begin “ a national, full-blown conversation.”

I agree. It seems to me the logic behind reparations is sound, principled, and moral.

It actually requires me to think more highly of my country, its citizens, and its capacity for truth and reconciliation. It requires America to think in terms of historical equity and justice.

The United States undoubtedly amassed its immense national wealth on the backs of slaves. But the slaves lived in penury, profited nothing,  and their descendents have inherited the legacy of debt and need. The disenfranchisement continued following slavery through tactical and often government-supported measures that denied blacks full access to education, credit and homeownership opportunities, legal redress and protection from property theft, and even kept black workers from accruing social security benefits.

Given this legacy, the result today is the racial wealth gap, which shows black families have paltry accrued wealth compared to whites. A recent report by the Institute of Policy Studies found that the median black family owns a mere 2 percent of the income a median white family owns.

The journalist  Ta-Nehisi Coates who  wrote an influential article, “The Case for Reparations” sums it up by saying, “Effectively, the black family in America is working without a safety net. When financial calamity strikes — a medical emergency, divorce, job loss — the fall is precipitous.”

The cornerstone of the case for reparations is the moral responsibility of the United States to improve the plight of black Americans who have been handicapped by an economy that favors whiteness. Evidence shows that the wealth gap even impact blacks in upper income brackets. For example, evidence shows that due to lack of savings and other resources black families earning $100,000 a year typically still live in the kinds of low-income neighborhoods inhabited by white families making $30,000 a year.

But how will the policy makers design and implement programs to redress this?  This is the lingering question.

It is clear that support for reparations must be accompanied by awareness of the billions – or truly incalculable sums — that the nation has taken from, and owes black Americans, both in terms of dollars and in terms of ruined lives and opportunities. While a majority of whites still appear skeptical, clearly support has been growing. Recently conservative columnist David Brooks published an article expounding,

These are high-minded words. I know that reparations cannot be reduced to “a check in the mail” to the descendants of slaves. It will require a full commitment to achieving goals that will require an influx of billions of dollars into programs that target black Americans and black communities. The possibility of this becoming a reality is a yardstick of our capacity for spiritual renewal.

Darryl Lorenzo Wellington is a communications fellow at Community Change.