In memory of Toni Morrison 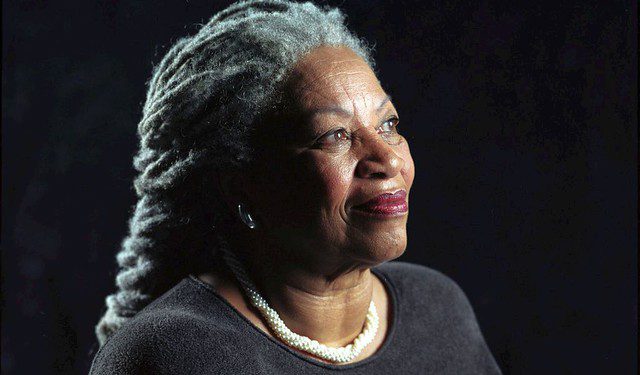 The first book that I read by Toni Morrison was her artfully bejeweled 1970 novel, The Bluest Eye.

I was in the upper grades in high school, maybe 16 or 17 years old,  but although I was an early reader, the lingering impression left by The Bluest Eye can be summed up in words which happen to be the same words which have appeared in many  of the eulogies since the Nobel-prizewinning writer’s death in early August, at the age or 88.

Those words have echoed in my mind whenever I picked up the latest Morrison novel, and – really – have colored my conception of writing.

A writer of style and substance

The words are style and substance.

The Bluest Eye was Morrison’s debut, barely one hundred and eighty pages long, compact, elegant, an accomplishment that was above all else a precision instrument.

The Bluest Eye told a story  of Pecola Breedlove, a very young girl whose life was burdened by poverty, sexual abuse, molestation, and colorism. I was already older than Pecola.  Although I had my own experiences with racism, Morrison’s novel, heavy on drama, and laden with subtleties, schooled me on the depths and complexity of diverse kinds of oppression.

It was my introduction to a complex world and the trajectories that make up what is today called an “intersectional” understanding of race, class, and sexism.

The Bluest Eye was highly atypical reading material on my high school syllabus.  In those days, in the early 1980’s, the preponderance of classroom attention was given to 19th century classics, which despite their literary merit often read today  like cultural dinosaurs. I suspect that Toni Morrison’s novel sneaked in under the gaze of the gatekeepers as a grudging acknowledgment to a plethora of new “-isms” then coming into awareness.

The Bluest Eye was a seminal event in the history of un-silencing unheralded voices.

I was a teenager who may have had trouble handling the adult subject matter, but I was  swept away by the language. I remember often revisiting passages — transfixed between discomfort and confusion – and wondering to myself: Was this really a novel? Or was this a lengthy poem? How should you characterize this kind of writing? Writing so stylized, so sumptuous.

I learned from The Bluest Eye that prose at its highest development is simply poetry that hasn’t been broken into lines and stanzas.

I didn’t know all that literature was capable of stylistically, poetically, or politically. I have learned today to appreciate the lesson. Toni Morrison in her subsequent novels, essays, and public pronouncements repeated the same enlightening  lesson over and over.

Language was Morrison’s instrument, but the substance of her work compelled readers to rethink the very nature of society  – including acknowledging that the legacy of African Americans belonged at the heart of our understanding of American history.

This may not appear to be such a revolutionary message – not today. You may ask, “Was there a time when Black American presence, including the lives and stories of Black Americans, was not considered material that made a significant cultural contribution?”

In many ways, yes, there was.

Long , long ago, in a time far, far away – that is – a time which really wasn’t so long ago, circa my high school years in the 1980’s, debates still raged over the definition of the “universal: related to the highest themes in poetry and literature.

Looking back on it, the context of the argument was extremely disingenuous.

Critics of the day still disguised their implicit bias beneath arguments that literature with racial protest themes or presenting feminist and LBTG realities couldn’t achieve the “universality “ of major works of art.

The implicit bias was that – while literature from Moby Dick to The Great Gatsby occurred in a specific history time and place dealing with notions of justice, equity and social —  the lives and protests of so-called “other” were discounted.

The critical consciousness of the day still enforced a literary ghetto where critics could put whatever they deemed  unartistic “sociology” – and thus conveniently discouraged sociological investigations of art and society.

Morrison was the major creative writer of a generation of artists and critics (including the critic Henry Louis Gates Jr.) who established that art was intrinsically a multi-cultural and multi- gendered project.

There were few highly reputed writers before Toni Morrison who could say with ease, forthrightness, and total impunity from criticism, “I’m writing for black people. I don’t have to apologize or consider myself limited. The point is not having the white critic sit on your shoulder and approve it.”

Yet Morrison could say it because by the time she made the comment in a 2015 interview in The Guardian, she had written numerous novels, including Beloved (1987), Jazz (1992) and A Mercy  (2015), which were extraordinary works of art  that underscored the impact of systemic racism and were highly experimental novels whose uniqueness owed a major debt to the blues, Jazz, and idiomatic Black English.

Morrison also wrote in her very last nonfiction book, The Origin of Others, that art was “a human project.”

There is no contradiction between a racialized, gendered, or Black womanist perspective and achieving universal significance. Works of art that achieve their artistic ends inherently broaden our capacity  for multiple levels of understanding.

This will be Toni Morrison’s legacy – an artist whose  reckoning with the suppressed Black American experience replenished the compendium of universalized human experiences.

Darryl Lorenzo Wellington is a Communications Fellow at Community Change.