The film Hidden Figures couldn’t have arrived at a better time in American history, as we truly suss out what it means to “Make America Great Again.”

History often gives us a reason to move forward.

Hidden Figures looks at African American female heroes at NASA in the 1960s. It’s the number 1 movie in American right now. My son, who is increasingly interested in math and science, can’t wait to see it. And we hope to do so with my mother and uncle in an upcoming weekend trip to St. Louis. It’ll be interesting to hear the discussion between two adults who grew up in the segregated south and a bi-racial child coming of age in the post-Obama era.

I first saw a trailer to the film last fall, which hangs in my mind today as it coincided with Apple’s president reply to a question about corporate diversity on the iPhone 7 team. He said they had a “Canadian, and a British woman.”

But this wasn’t a sitcom, but the current state of affairs at one of the world’s most prominent shapers of technology and culture.

Well, it was at least a little more hopeful than the late conservative activist Phyllis Schlafly’s lament that too many women were studying for STEM (science, technology, engineering, and math) degrees, thus forcing men out of those jobs.

Our future as a nation, our future as a civilization will depend on amassing STEM talent but also scientists whose experiences can break us out of groupthink.

The movie’s story follows the lives of mathematician Katherine Johnson (seen below in a NASA photo from 1966), engineer Mary Jackson, and Dorothy Vaughan, the mathematician who headed an all-black female computing group. Winning the space race created room for smart women, but groupthink confined black and white women in separate spaces. 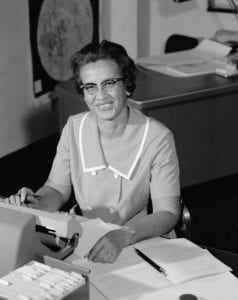 When it comes to science, engineering, mathematics and technology black women are still as rare as tanzanite — a gemstone one thousand times scarcer than diamond. It’s an apt comparison, if you consider how few physics PhDs are awarded.

American universities conferred physics PhDs to 22,172 white males between 1973 and 2012. During that same period, 66 black women received the coveted degree. The same gulf between white males and black females holds through in engineering, mathematics and computer science.

Stoking the passion for science and technology has to begin early and must be nurtured through middle school and high school, says LaTheresa King, curriculum coordinator for Fort Wayne Community Schools. She is a former science STEM specialist with the Florida Department of Education and a science coach in Lake County, Florida, with master’s degrees in business administration and educational administration.

King, who grew up in Fort Wayne before going to college at Kentucky State University to earn a degree in biology, says that elementary school girls out test boys in math and science, but the gap erased by middle school, then inverted by high school. King cites a variety of reasons why this happens, including peer pressure to not be “geeky,” and a lack of a pipeline of women in STEM fields reaching back to help the next generation.

In Madison, Wis., the Urban League, Big Brothers Big Sisters, and the Girl Scouts teamed up last year with Strang, a local architectural and engineering firm, to offer a summer STEAM camp for middle school youth of all races.

“We received applications for more than double the number of slots that we had in the camp,” the Urban League recently reported to its members.

That pipeline is so important for young women of color, especially seeing women who look like them thriving in science and tech careers, King says. Locally, for the past four years, King has hosted a hands-on STEM conference with the Girl Scouts and Indiana University-Purdue University Fort Wayne.

Of course, self-motivation comes into play. But, King says, her parents didn’t hold her back from asking questions of her doctor and dentist, when she was a young student thinking about a career in medicine. And she had teachers who steered her to summer programs at state universities that opened her mind as well as opportunities for her to become the first child in her family to go to college.

King’s experience ought to be the rule, not the exception.

However, earning an advanced degree in the sciences doesn’t negate sexism and institutional bias.

Indeed, 100 percent of minority women in STEM professions surveyed say they have had to deal with common gender- and race-based bias on the job, according to a recent University of California study.

Among the common biases against all women in science face, include the tightrope, where women must balance between being seen as too weak or too aggressive; prove-it-again, where women are held at higher standard than their male colleagues; Maternal wall, a barrier penalizing women for having a womb and using it; and tug-of-war, a power game that pits women against each other

More than three-quarters of black women reported that they were victims of Prove-it-Again bias. This is not uncommon for all women, and for that matter, minority men. To complain is to be seen as a whiner; to complain en masse is cast as entitlement; to be quiet is to become invisible

Given that the world is witnessing rapid growth in technology at the same time new strains of diseases, our civilization needs its best and brightest at the helm. It begins at the early years, so supporting the efforts of King and other educators to light the path for all children should be a priority of our elected officials.

This is how you honor the achievements of pathfinders.

This article originally appeared on Medium.

Inside The Statue of Liberty’s Radical Feminist, Pro-Refugee Roots

America may have rejected a woman to lead the nation, but Lady Liberty’s steadfast arm still leads the way