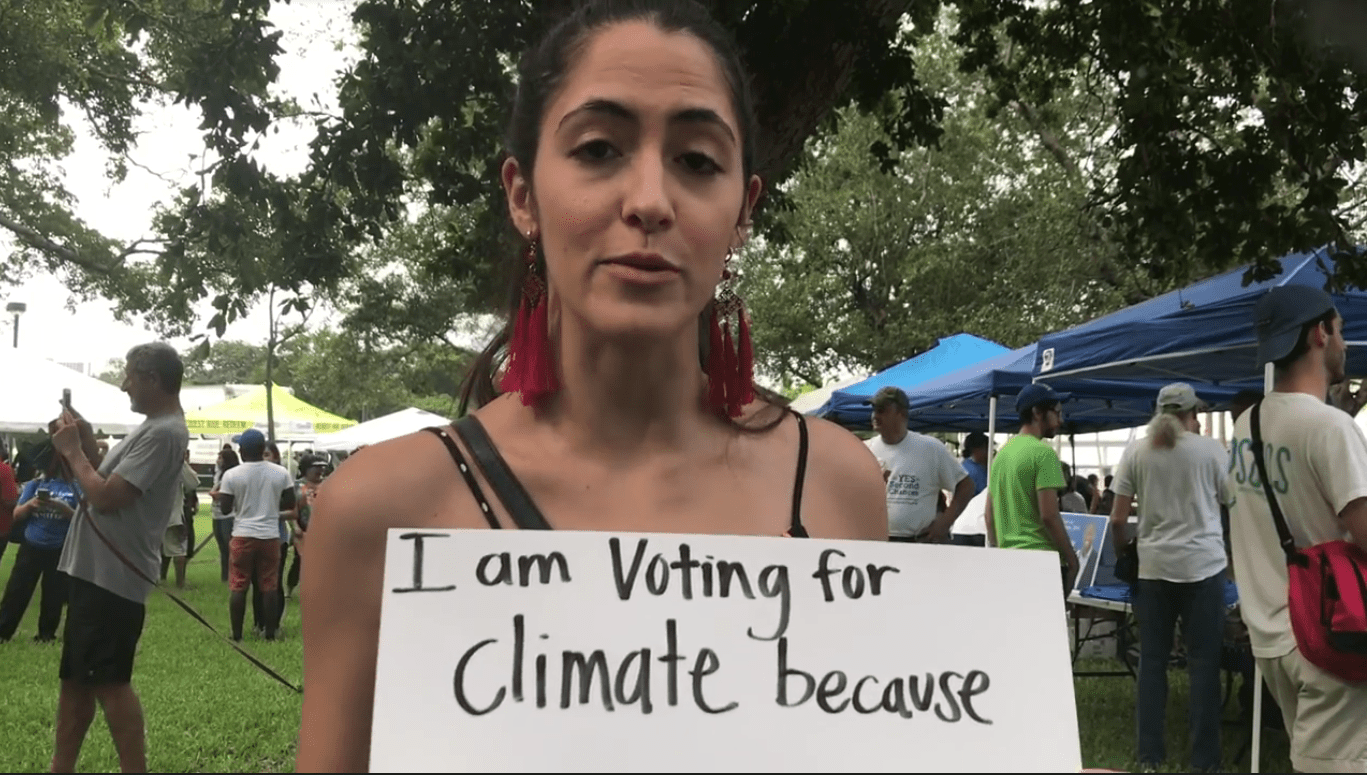 Voter at the Climate March in Miami.

As a young child living in Colombia I lived through an earthquake. I am thankful to have been far from the epicenter of the shake in a well constructed structure, but many of my friends and community members did not have the same fortune. I will never forget the fear and uncertainty I felt as the earth shook beyond my control.

It was a whole other experienced when I moved to the U.S. and learned about the impact humans are having on the earth in my 7th grade science class. I was still learning English but I did not miss a word of the lecture.

Even as a twelve year old, I could not understand how our leaders would refuse scientific evidence and risk our delicate and powerful planet for the sake of private interests and profits.

In broken English and with little resources, I went to the principal, student government, teachers and and mobilized my entire class to recycle and demand our school take action towards climate justice.

Unfortunately after 12 years, we still have much work to do to educate people. Many of our politicians and leaders continue to put private interest and profits over our only home.

But the people are taking action.

Community members gathered recently in Miami’s Bayfront Park to rise up for climate, jobs and justice. At the event, hundreds congregated by the Miami bay to symbolically acknowledge and speak up about the coming challenges as climate change, sea level rise and natural disasters affects our homes and future.

Artists and community leaders shared the stage in storytelling, advocacy and calls to action for climate justice for the region’s most vulnerable residents. For the community, the effort is meant to make climate action, the Puerto Rican recovery after Hurricane Maria, and Miami’s resilience a cornerstone of the regional and national dialogue this November.

At the rally, I asked voters why they are voting for climate this November 6.

The Puerto Rican community was particularly vocal about their demands and need to elect people who care and understand Puerto Rico.

At the event, I had the opportunity to talk to Adriana Rivera who expressed that on November 6, she is voting for climate. “Storms are getting worse, like Hurricane Maria that went through my Island of Puerto Rico and left five members of my family homeless. I need elected officials to address climate change. It is real,” said Rivera.

Adriana Rivera was not alone. Her friend said, “in November 2018, I am voting for climate because I am a Puerto Rican woman who lived through what hurricane Maria did to the Island. 3,000 lives were lost and this Administration made no effort to bring in the aid that was needed.”

Like many Floridians, Karina Buhler voiced her concerns about unchecked development, unregulated sugar industry and environmental mismanagement that have resulted in ecological disasters like the recent tide of toxic algae across the sunshine state. Karina said she is “voting for climate because capitalism sucks, companies make money out of ruining people’s communities and ecosystems. That’s messed up. That’s why I am voting for climate.”

Brian Steven Diaz registered to vote for the first time at the climate march. “I am voting because I want to live in an earth where people care about it. Our world is beautiful. People are just throwing it out. It is not okay, ” said Diaz.

In Florida, climate voters are paying close attention to the candidates for governor.

Sierra Club, a leading environmental organization, recently endorsed Democratic candidate Andrew Gillum. In his remarks, Florida director Frank Jackalone said that Gillum “will tackle climate change as the cause of rising seas, hotter weather, and stronger hurricanes, unlike Governor Scott, President Trump and his opponent who bury their heads in the sand and refuse to even talk about climate change.”

Florida voters for looking for bold leadership in addressing climate issues and they will unite their votes this November 6.