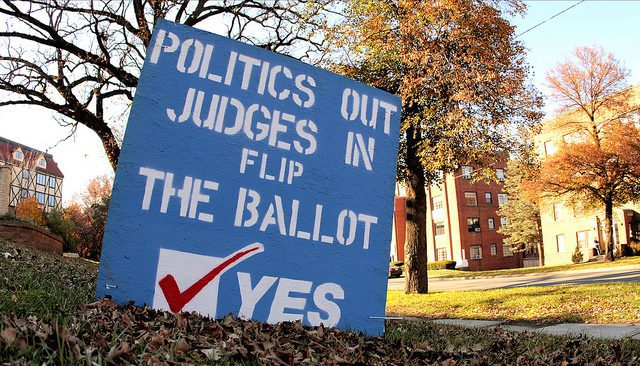 Donald Trump selected a clear partisan as his pick to replace Justice Anthony Kennedy who announced his resignation at the end of the Supreme Court’s term.

Federal appeals court judge Brett Kavanaugh is an Republican Washington insider who is such a committed conservative there is little chance he will uphold the values of fairness, equal voice, dignity and freedom that are embedded in America’s democracy.

The announcement of Justice Anthony Kennedy’s resignation comes at a critical time for progressive causes in this country. Just months away from the midterm elections, Justice Kennedy spoke to President Donald Trump and encouraged him to select a replacement that will undoubtedly push the Supreme Court to the right for decades to come.

Justice Kennedy’s legacy on the Supreme Court is mixed. He joined the bench during Ronald Reagan’s presidency, and since then has been considered a swing vote on the most contentious issues, including abortion rights, LGBTQ rights, gun laws, and campaign financing. As a Republican, he has not been a progressive by any means – among his last acts as a justice, he voted in favor of a new iteration of President Donald Trump’s infamous travel ban – but he has come down on the progressive side on several issues, abortion being the most significant. In fact, conservative activists are already sharpening their knives, preparing for a battle to overturn Roe v. Wade.

From the start, Trump campaigned on a promise to stack the Supreme Court with conservative justices to undermine the success of progressive issues during President Obama’s tenure, and Republicans have been complicit every step of the way. In 2016, Senate Majority Leader Mitch McConnell blocked Obama’s nomination of Judge Merrick Garland, allowing Trump to replace the late Antonin Scalia with Judge Neil Gorsuch, a conservative who in just the last week has supported the Muslim ban and undermined unions in a landmark case preventing them from collecting fees for collective bargaining.

Now, McConnell is saying that confirming Trump’s nominees is his “top priority,” and will move to confirm justices before voters have a chance to flip the House in November. And it seems that in fact, Justice Kennedy’s resignation was deliberately timed to prevent a Democrat-controlled House from blocking a Trump nominee.

Between Kennedy and Gorsuch, we’re already seeing a what happens when conservative voices outweigh moderates and progressives at the Supreme Court.

So much as it at stake now, not just with abortion, women’s healthcare, and LGBTQ rights, but now also immigrants and unions. The Supreme Court is the last defense for we, the people, and its important that its members have values that lead them to defend our rights, no matter their religious beliefs or racial backgrounds.

Justice Kennedy’s resignation was unexpected, but he is 81-years-old, and perhaps it would not be unreasonable to expect that his time on the Supreme Court was coming to an end. The Justices close to him in age are Ruth Bader Ginsburg and Stephen Bryer, both who were appointed by Democratic presidents. Justice Ginsburg is 85 and Justice Bryer is 79, and while neither is likely to retire in these circumstances, there’s no guarantee that they will stay in their seats through the Trump presidency.

All of this makes raising our voices that much more important. U.S. Senators, who are responsible for voting Trump’s pick into the court, need to know what is important to us as voters and that we want justices who value the ideals of freedom, democracy and equality. And while we are at it, it is crucial that we flip the House in November, too, to stop Trump from instituting other measures and policies that serve to turn the clock back on the rights we’ve gained as women, as people of color, as immigrants, and as queer folks.