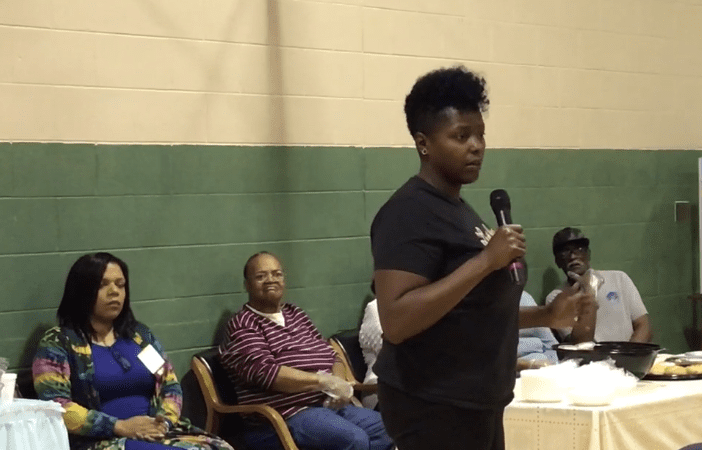 Tia Simpson is a Flint resident affected by the water crisis in that Michigan city. During a media meet-up at a local senior center, she talks about the devastating impact the situation has had on her and why she speaks up on behalf of herself and others.

Tia Simpson stood in front of nearly 40 journalists pleading her case for clean and affordable water. The 34-year-old Flint resident endured the aftermath of being exposed to the city’s toxic water and depleting quality of life.  She, along with households in Flint, face a challenge that areas similar to the predominately black and poor community face: Having access to affordable and clean water.

“My water bill is extremely high,” Simpson said. “Is it fair? I don’t think so. I work, and I can’t get assistance to even help pay for water that I can’t even really use. I’m not saying I’m any better than anyone else, but I go to work every day. There is no help for people like me.”

The fight for water equity for people like Simpson has been a slow one as she, along with others, struggle to pay high water bills while officials say their hands are tied as they work to ease the burden of high water rates for communities like Flint.

On average, Detroit’s Great Lakes Water Authority, the system that supplies Flint and other municipalities with water, has raised its water rates 11 percent a year for more than a decade. This year, Flint saw another rise in rates, but city officials have yet to put the cost on residents.

A solution to make water more affordable could be as simple as putting income tiers in place or implementing income caps for communities giving poorer water customers a break from paying exuberant bills, but officials say legislation prevents them from doing so.

During a recent Society of Environmental Journalists conference in Flint, Pugh said the city is working to make adjustments for people like Simpson but didn’t reveal details of precisely what officials are doing.

It wasn’t until some municipalities left the water authority that they saw relief in water rate increases.

“July 2018 was the first time in 17 years where we didn’t have an increase in water rates,” said Jeff Wright, Genesee County Drain Commissioner. “I’m confident that we will save at least $270 million to $280 million over the next 30 years.”

In 2014, Michigan officials made a decision to switch the city’s water supply from the water authority to using the Flint River temporarily as a cost-cutting move that eventually exposed nearly 100,000 people to lead-tainted water. The initial promise was for Flint to connect to the Karegnondi water line coming from Lake Huron after it was complete. That never happened. Flint eventually found itself reconnected to Detroit’s water, and the city is now facing a multimillion-dollar debt as residents refuse to pay for water they couldn’t use.

Detroit water rates are determined by distance and elevation, meaning the further away a municipality is, the more their water cost. When Genesee County switched its source, Detroit’s water authority lost more than a dozen municipalities.

Programs have been implemented in urgent cases where hundreds, if not thousands of residents faced penalties for delinquent water bills. But those programs don’t address the working poor — because they have some money coming in, just not a lot of it — forcing them to find other means to pay their bills.

“That doesn’t help people like me,” Simpson said. “We have high water rates, high insurances, high utilities in general in Flint. We are barely making it. Programs are for people in severe poverty. They are not for people who are going to work every day.”

A number of research efforts and case studies have been compiled focused on water equity. A movement in areas like Baltimore, Philadelphia, Pittsburgh, Buffalo and Chicago aim to help residents with inflated water rates with affordability plans, including capping rates at no more than 3 percent of income for low-income families.

“There are ways to assist without changing the law,” Wright said. “Each [municipality] can put in place different programs. Some townships have put in senior discounts; some have put in economic situations. It’s already being done in some communities without legislation change.”

It is true customers should pay for the water they use. But burdening cities struggling with poverty is not the way through a crisis that can be addressed by willing ourselves to implement income-based solutions that consider the needs — and the dignity — of the working poor.

Jiquanda Johnson is a fellow of the Center for Community Change Action and founder of FlintBeat.com.

With so much at stake in this election, in Florida and across the nation, voting this November is critical. That’s why former First Lady Michelle Obama visited the University of […]