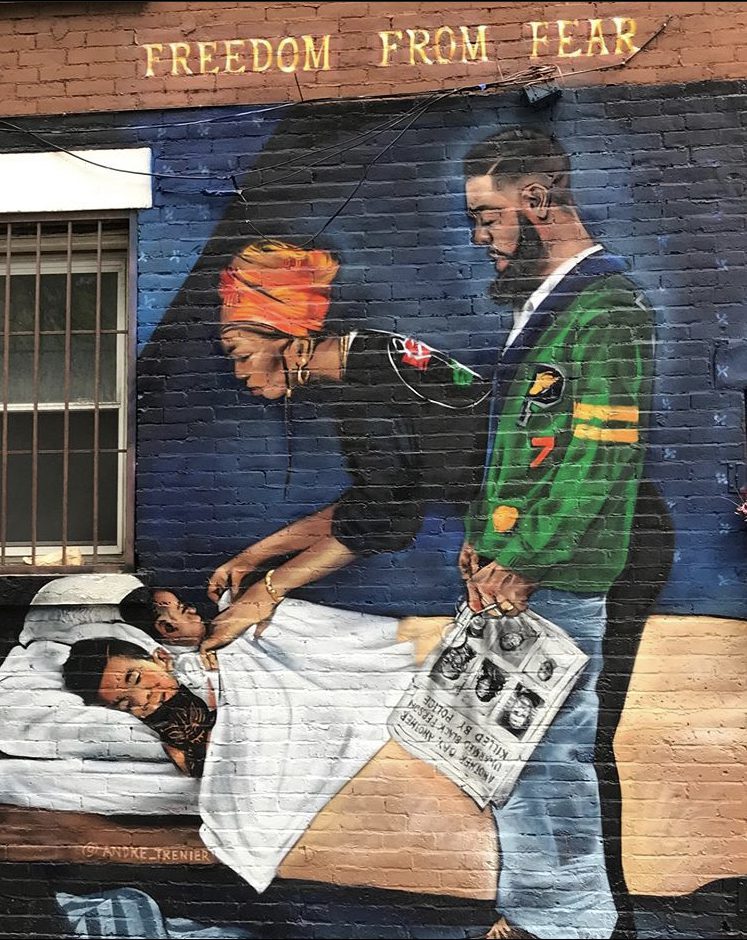 a reimagining of Norman Rockwell's painting by Andre Trenier (On Alexander ave. and Bruckner Blvd.)

Black Richmond Residents and Activists Have Been Ready To Defund Police Since 2016. Now Everyone Else Is Catching On

Summer of 2016, New Virginia Majority led canvassing in a historically Black neighborhood on the Southside of Richmond. Residents were asked about the issues that concern them most. The answer? Public safety. Even more specifically, the residents said they wanted to be safe from police.

Around the start of the uprisings in response to George Floyd’s murder in mid-June, a Richmond protest led by local demonstrators was abruptly interrupted by a police officer’s ramming an SUV through the demonstration. Sierra Shoosmith, one of the young protestors and witnesses to the incident was shocked by what she’d seen, although she was aware police brutality is a real problem. “They are supposed to protect us,” she said.

Ironically, public safety has been the largest expenditure for as long as people can remember in Virginia’s capital. Both the 2020 Fiscal Year budgets for the Richmond Police Department (RPD) were proposed at $100 million, and half of that was proposed for social services.

Several attorneys denounced the police’s actions and pointed out that a civilian doing the same thing “would have been charged with some degree of criminal assault,” and also asserted that the police department handled the situation in the “least transparent and most aggravating way possible.”

Local activists like Marijuana Justice founder, Chelsea Higgs Wise, has advocated for community control for years. “We’re on a performance-based budget,” Wise said. “Which means the police should be able to show us how they are preventing crime in order to get more money, but they’re on a step program to get more money no matter what.”

When Marcus-David Peters, a 24-year-old Black man was shot and killed by a Richmond police officer in 2018, while experiencing a mental health crisis, the community knew then that the need for change was urgent.

Now, the popular downtown Richmond intersection where the towering Robert E. Lee statue stands, was renamed Marcus-David Peters Circle. City council members are finally starting to listen to the demands of the people, and activists are supporting Peters’ family in their call for the creation of the “Marcus Alert System.”  The system proposes that mental health professionals be the first responders in a suspected or confirmed mental health crisis, allowing for police to only be called in the case “back-up” is needed.

“If our mental health professionals are now at the main source of the seams, then they should also be getting the funding and resources that can help train them in a way that can best humanize Black and Brown people in the streets,” said Wise. “We’ve always said it’s possible to fund other things.”

Following the uprisings across the country in response to the tragic murders of Ahmaud Arbery, Breonna Taylor, George Floyd, and Rayshard Brooks, many people in the city are advocating for more police bias training. On the other hand, activists like Chelsea are advocating for more community control. “With the transition of power and authority, comes the transition of money,” said Wise.

Community members and activists have been urging city officials to reallocate money to other resources for years. For example, instead of police acting as the main responder for “wellness checks,” mental health professionals should be on call. Instead of police preying on Black and Brown people, by making “routine” traffic stops, the DMV could have a department that specifically monitors traffic.

Richmond mayor, Levar Stoney, who is responsible for proposing the city budget, is also currently proposing the Reimagine Task Force, for which he recently announced appointed members. Activists see the task force as a way to implement a board with cops at the table, and not a board that would actually be led by the community or impacted people, as Mayor Stoney included several members from RPD on the list.

With years of activism in Richmond under her belt, Wise says, “We’re in a place where we are shoving out money and hiring police who have a history of killing people. We don’t need another board created by people who have been giving us poor legislation, we need it from the people. We are saying defund the police and refund our communities. Our communities deserve that refund.”