Resist normalizing violence in any form 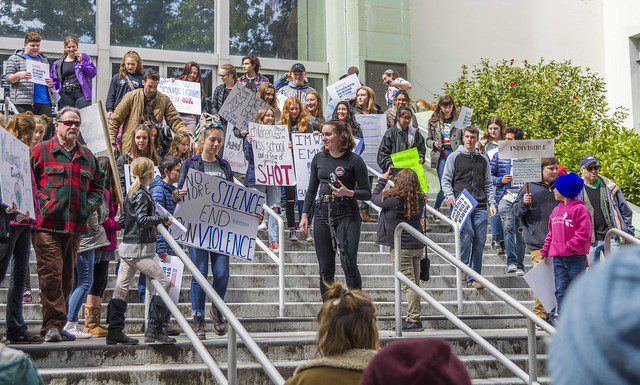 Riley Howell and  Kendrick Castillo are heroes, yes. They are martyrs too. They are also victims.

On April 30,  a lone gunman entered a campus building at the University of North Carolina, and began firing. Before campus security arrived, Howell, a 21 year old student charged and tackled the shooter. While there were several injuries, Howell clearly succeeded in limiting the number of casualties.  But the fatalities included Riley Howell himself who received three shots, at close range. He died from his injuries.

Only a week later, a pair of under-age shooters stormed a charter school in Colorado, and unleashed a hail of bullets.  Eighteen year old Kendrick Castillo lunged at the shooter, and tackled him, while other students joined and pinned the assailant down. Thanks to Kendrick  Castillo’s intervention there was only one fatality. Kendrick Castillo himself was fatally shot.

Riley Howell and  Kendrick Castillo’s names have joined  the funeral dirge that has become gun violence in schools in America.

Riley  Howell and  Kendrick Castillo’s funerals were attended by hundreds who honored their sacrifice for the sake of others. They have both been deservingly lauded. Yet the story of their heroism and  victimhood is finally a tragic story.

It is inspiring to consider the actions of heroes, but it is deeply dispiriting to acknowledge that  heroes should receive better rewards. Teenagers should not have to become martyrs. I hope that Howell’s and Castillo’s names will live on. However, while we honor them, let’s not allow the accolades to have the effect of normalizing gun violence.

What is it to “normalize” violence? What I mean is to begin to accept gun violence psychologically as an unremarkable aspect of everyday life, so that you begin to make allowances for its inevitability. You begin to adjust your own standards of right and wrong so that individual “heroism” stands out more than the social responsibility to end gun violence.

Normalizing leads you to grudgingly accept the unacceptable, or celebrate individual heroism while ignoring the big picture.

Normalizing the unacceptable begins happening when similar stories appear again and again in  the news. I remember that when I first read the newspaper reports of the incident at the University of North Carolina, my first thought was, “This time there was only one person who died.”

That’s the insidiousness of it. You begin to make adjustments that distract you from the big picture.

Homicide. Domestic violence. Sexual abuse. Child abuse. Suicide. These are incontrovertibly wrong. They’re social ills which can never be depicted otherwise. It’s at the very root of our humanity  that we have to create a better society by minimizing their occurrence everywhere and for everyone. We take refuge in good luck “this time” as a form of copping out.

A young adult who successfully leaves an abusive domestic violence situation, or a woman who successfully wards off a sexual attacker are laudable heroes whose stories should embolden other victims, yet we do their heroism a disservice if we cite their “successes” while diminishing the ongoing threat of child abuse and sexual abuse – or downplay our awareness of the statistics. There is too much violence in all forms  in America. The threat of gun violence remains ever-present. It’s as close as the nearest gun shop — unless we take legislative action.

The news stories covering the deaths of Howell  and Castillo underscored their heroism by including commentary from police and security officers on how students, classroom teachers, and crowds should respond in case of a gun assault. These articles note that drills for what to do during a shooting have become routine in schools across the nation, in some cases for children as young as in kindergarten.

An article in the New York Times included commentary from authorities, who stated Howell’s and Castillo’s actions were consistent with their own tactical advice to civilians, which is “run if you can. Hide if you need to. And fight if you must.”

I acknowledge the necessity to deliver this grim advice.

I worry, however, that this official nod of respect from the authorities may have a misguided impact. The responsible answer to gun violence cannot rest alone in training youth to (hopefully) survive in a distorted, abnormal, and violent reality.  “Run, hide or fight” is wisdom that should be delivered with remorse, even an apology from the elders that it is the best our society can offer.

The shame on our part is that society can do more.

Former Supreme Court Justice John Paul Stevens reminded us of our obligation to do more when he recently published an article  in the Atlantic stating that the failure to make rulings that would expedite gun control legislation was the biggest disappointment of his career.

Stevens wrote that gun control “is desperately needed to prevent tragedies such as the massacre of 20 grammar-school children at Sandy Hook Elementary School on December 14, 2012, from ever happening again. But such tragedies have indeed happened again.”

And they keep happening. The trail of losses leads to the recent deaths of Riley  Howell and Kendrick Castillo. It is our obligation to honor their deaths by refusing to normalize the violence, and passing proactive measures that regulate access to guns.

Darryl Lorenzo Wellington is a writer at Community Change.