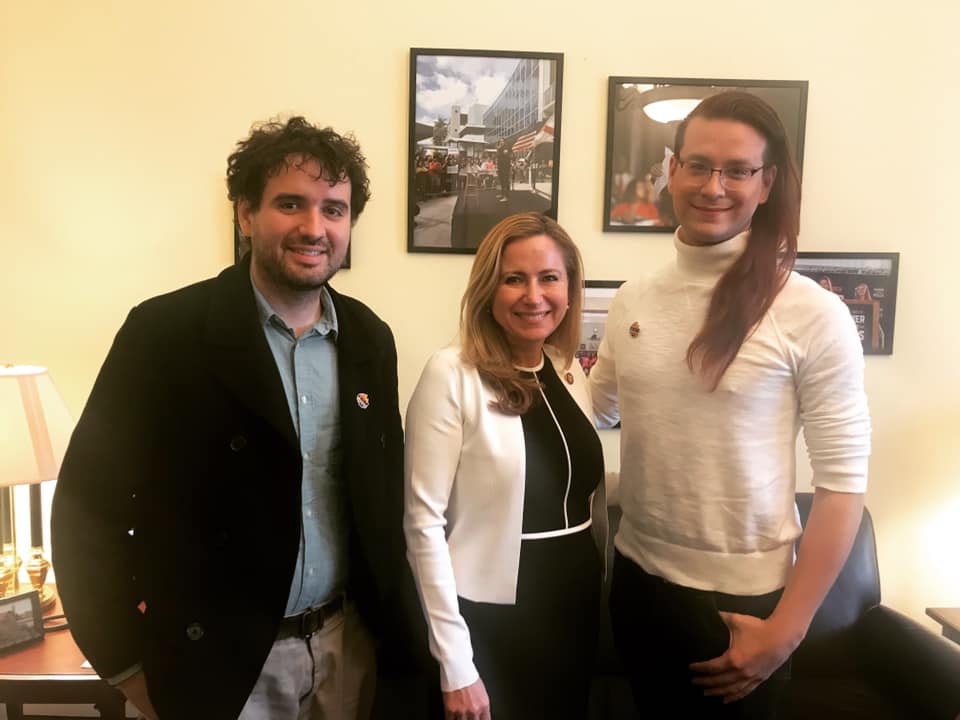 We just had a great meeting with Rep. Debbie Mucarsel-Powell who expressed her commitment to work to end the #shutdown without funding the wall and support #TPS legislation. It’s great to have a champion for immigrants in Congress. Credit: Thomas Kennedy

The government shutdown that just ended was the longest in American history. Speaker Pelosi and Trump engaged in a war centered around Trump’s demand for $5.7 billion in funding for a border wall that he said Mexico would pay for and that has been largely deemed useless and ineffective by experts.

Shortly before the end of the shutdown, as a member of the Florida Immigrant Coalition (FLIC), a statewide organization that is part of the national Fair Immigration Reform movement (FIRM) national network, I went with a colleague to the Capitol to meet with members of the Florida delegation from both parties to find out what their plans were to end the shutdown. We joined more than a dozen fellow immigration rights advocates from around the country who are part of the FIRM network.

Our position as an organization that fights for the rights of immigrants is that the wall is unnecessary, ineffective and that the government needed to be reopened without a single dollar going towards the wall’s construction. Fortunately for us, we found that this was the position taken by all the Democratic lawmakers that we visited.

Representative Debbie Mucarsel Powell told us that she was committed to ending this shutdown without funding the wall and Representative Val Demings told us the same thing. Every single Democrat seemed on message and said that their caucus at large was holding the line.

The Republicans were a mess.

Unlike the Democrats, not a single Republican representative met with us, sending legislative staff instead. Understandably, it was a busy time in the Hill, but these aides seemed as bewildered as us on how to end the standoff. Representative Waltz aide told us that the Democrats were completely at fault and that Waltz remained committed to extracting funding for the wall out of any negotiation and Representative Yoho told us something very similar, despite the House passing several funding bills including an emergency disaster relief bill that includes an amendment funding the federal government through early February.

In their frustration, some Republicans seemed to reveal their true feelings. Representative Posey’s staff told us that the standoff was bound to continue as both parties seemed entrenched in their respective positions. The office of Representative Matt Gaetz similarly acknowledged that both sides were unlikely to compromise, and that Trump would likely veto any bill approved by both chambers of Congress.

Shortly after our visit to the capitol, Trump addressed the nation from the White House to propose a “compromise” deal to end the shutdown that did little to compromise and it should be a non-starter for Democrats. It includes basically everything he wants including $5 billion for the wall and in exchange a three year extension for DACA and TPS, further kicking the can down the road. It’s disgusting to see the Trump administration use people as hostages but it was encouraging to see Democrats quickly reject this deal.

A little over a week after our visit, Trump announced the end to the shutdown.

My conclusion from our meetings was simple: The longest shutdown in our history could have – and should have – ended a lot sooner. Senate Majority Leader Mitch McConnell could have brought forward a bill to fund the government but didn’t do it because it would anger Trump. Several funding bills without border wall funding had passed the House and allegedly there are enough votes in the Senate for these to pass there as well. This would have put Trump in a position to either sign the bills or veto them and keep the government closed.

While Trump has certainly demonstrated enough idiocy in the past to believe that he would veto the bills, it would likely be political suicide to do so.

We have less than three weeks for Congress to come up with a funding bill agreement that doesn’t include any funding for the wall. Pressure needs to be exerted on the Senate to pass a funding bill. Mobilize folks to Republican Senate offices. Make calls. Make them uncomfortable. Demand that they avert another fiasco without funding Trump’s racist and useless border wall.

Thomas Kennedy is the Political Director for FLIC Votes and a communications fellow for Center for Community Change. He tweets from @Tomaskenn.