If Trump succeeds in destroying our health care, protections for millions of people with pre-existing conditions could disappear 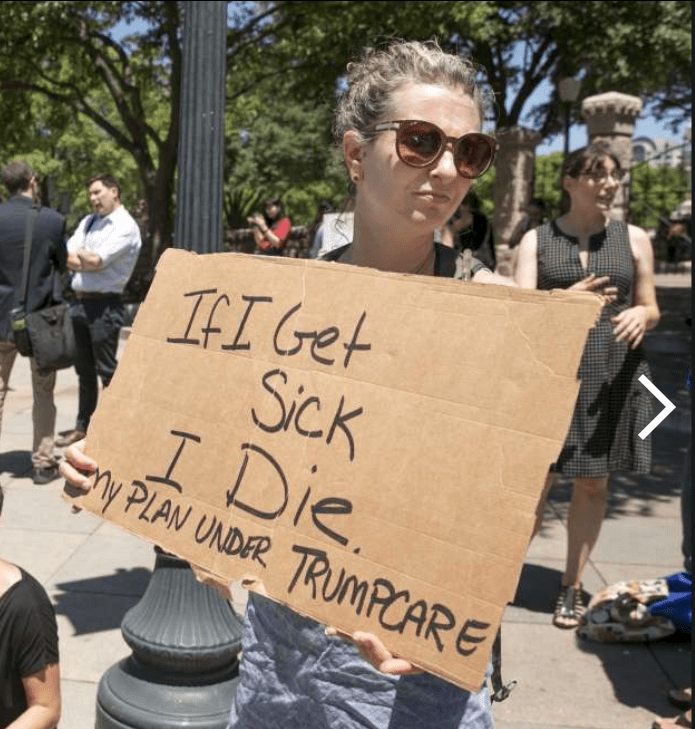 President Donald Trump has defined his time in office in opposition to people who work for a living.

Time and time again, the American people have watched him turn his back on us — so we are rising up and speaking out.

In his first year in office – and in the face of overwhelming opposition from people across the country – Trump forced a disastrous Tax Bill through Congress that gave millionaires, billionaires, and wealthy corporations an even bigger slice of the pie. Ultimately, the bill gave 83 percent of its benefits to the top one percent and sent a message to working Americans that our lives were never the priority.

Legislators in favor of the bill tried to promise us that the bill would help lower-income Americans. We know that was never the plan.

Instead, the bill cut the corporate tax rate from 35 percent to 21 percent. The bill allowed the wealthy to rake in more and more profits with the corporate buy-backs. Trump and his supporters told us those profits would lead to more jobs—all we’ve seen is more padding on the wallets of the wealthiest Americans.

At the same time, the legislation weakened part of the Affordable Care Act, paving the way for at least 13 million Americans to lose their health insurance.

In essence, Trump’s prized bill was a giveaway for wealthy Americans and put real Americans further at risk.

Since then, the President has not let up.

He has waged attacks on our economic security, on our financial future, and on our health care. Trump has been instrumental in leading the attack on the Affordable Care Act and protections for people with pre-existing conditions. He tried – and failed – to repeal the Affordable Care Act in Congress. Now, conservatives are pushing to repeal the bill through the courts.

Let’s be clear: if Trump succeeds in destroying our health care, protections for 130 million Americans with pre-existing conditions could disappear. Nearly 12 million older Americans would pay more for their medication. And insurance companies could charge women more than men.

These attacks are economic attacks. They are threats to the financial security of millions of families across the country. This does not have to be the reality of families in our country; these hardships should not exist.

In our America, no one should ever have to choose between rent or a medical bill.

In our America, no one should ever become bankrupt in their attempt to pay for their health care.

In our America, no one should ever die because they can’t afford the medicine or the treatment that they need to survive.

Every time President Donald Trump threatens and attacks Americans’ economic safety, he is putting American lives on the line. So instead, we’re raising our voices to fight back by holding legislators accountable with our vote.