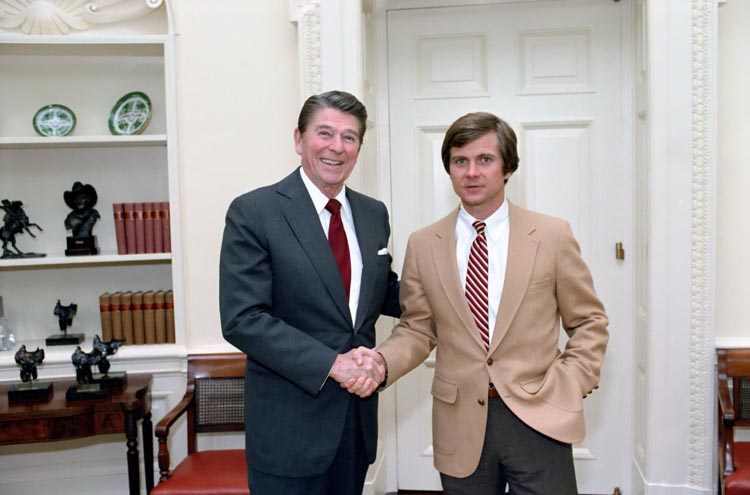 President Reagan with Lee Atwater in the oval office in 1983. Photo from Wikipedia.

A bad dream is a bad experience. But a truly terrible experience occurs when a bad dream feels like a premonition.

Judging by media stories, online commentary and conversations with friends, I see that millions of Americans are suffering from nightmares triggered by tensions surrounding race, race relations, and violence.

They’re suffering bad dreams given the anti-black and immigrant vitriol exuding from the White House, cavalierly mouthed and tweeted by President Trump.

The premonition? It’s simply put the fear that things will only get worse.

And at that point, the specifics of the nightmares vary, yet they involve spiraling into some kind of terrible chaos, or a future so morally bankrupt that it could recall living in a permanent state-of-emergency, or worse, under the pall of the kind of bygone European fascism we prefer to believe could never come into power again.

Most people’s happiness depends in large measure on a sense of daily security, and the probability that they will maintain a modicum of control over their experiences.

But nightmares are a result of a feeling the world is spinning out of control.

I remind myself that no good comes from giving in to mindless fear, paranoia, or constant dread. The fear of the nation spiraling into a racial nightmare is not new.

In my youth, whites in the South routinely overacted to every perceived threat, or every eruption of violence in America’s poor and desperate communities by crying that the country was descending into “a race war.” They often misguidedly accused black Civil Rights leaders of “race-baiting.”

In 1992, when the L.A. riots broke out in response to the Rodney King incident, people cried, “America is disintegrating into a nightmare.”

There can be false scares, inflated threats, and illusory nightmares which are indeed a form of denial. The fear in 1991 was hyped by paranoia, when the real solution to the threat of violence could be achieved by ameliorating police brutality, poverty, disenfranchisement, and improving education.

Indeed, the most clear-cut and egregious examples of “race-baiting” in the late 20th century have been instituted by conservative white majorities against minorities. It’s a falsehood that “race-baiting” has been a game of tit for tat. Conservatives policies have been the beginning of today’s nightmare  – a politics of fear built on the backs of people of color, the poor and – most recently – the undocumented.

It isn’t hyperbole, nor paranoia that in 1981, Republican strategist Lee Atwater described the party’s white voter strategy. He explained that the Republican party was a safe haven for candidates who relied on coded race-baiting.

Atwater boasted, “You start off in 1954 saying ‘Nigger, nigger, nigger,.” By 1968 you can’t say ‘nigger’ — it hurts you, backfires.  So you say other stuff like forced busing, states rights, and all that stuff.”

Presidents Richard Nixon and Ronald Reagan continued manipulating the electorate with this same vein of innuendo and racism. They indulged in cavalier and statistically inaccurate portrayals of the poor as comfortably ensconced, even wealthy welfare frauds.

Recently, a recording emerged of Nixon and Reagan trading racist humor, but the recording in fact reflected the tenor of their presidential administrations.

President George H. W. Bush achieved his election victory in 1988 by running highly frequent TV advertisements highlighting a black criminal named Willie Horton. It got to the point that Horton’s name became the symbol of the unrehabilitated “other”  threatening white America.

Trump’s has carried on the tradition of his Republican predecessors.

In Trump’s world, whites must “stick together” or be overrun by Hispanic murderers and rapists, psychotic immigrants, radical blacks, ungrateful liberals, and Muslim terrorists.

The Trump administration is characterized by toying with racist and sexist ideas for political advantage. It’s expressed in Trump’s behavior in so many deeds from juvenilely mocking women’s physical appearances to xenophobically informing American-born citizens to return to “the crime-infested places from which they came. “

Former white house chief strategist Steve Bannon has begun boasting to conservative audiences, “Let them call you racist. Let them call you xenophobes. Let them call you nativists.”   Meanwhile, the Trump administration’s head of U.S. Citizenship and Immigration Services recently argued in a press conference that the inscription on the Statue of Liberty welcoming immigrants is about “people coming from Europe.”

Trump’s America is a white nation where “real Americans” – white heterosexual males – regale privileges that they maintain uncritically, and patriotism is maintaining silence, tacitly sustaining the status quo, even while its influence rolls back  a sense of cultural belonging.

To millions of Americans including Blacks, Jews, Asians, Hispanics, women, gays, and white progressives, Trump’s vision is a nightmare.

Those millions include a particular African American male – myself.

Relief, however, rests with knowing that a collective bad dream can be as powerful as a collective good dream if it leads to collective action.

It is knowing that our powerlessness is temporary, before we have a chance to restore justice and reassert the kind of moral leadership we respect.