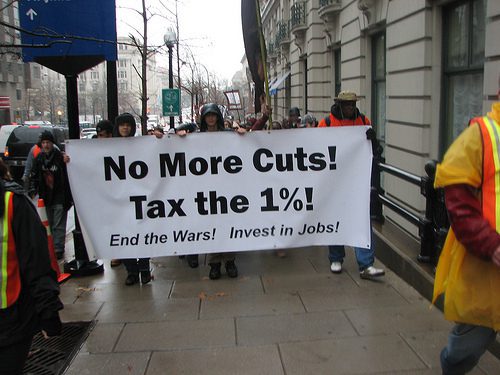 The proposal is called “Budget for a Better America.” But this budget disguised as a way forward is actually just another way to hurt already hurting Americans.  It would go after billions in cuts to Medicaid, further reduce funding for the Children’s Health Insurance Program (CHIP), and strangle Medicare.

Remember when Trump repeatedly and very recently promised to safeguard some of those very programs for the most vulnerable Americans? In his State of the Union address, just days before the budget release, he said, “We will always protect your Medicare and Social Security.”

If it wasn’t broadcasted to millions of people on the record, I might have thought I was dreaming. Because this budget proposes to slash $800 billion — that’s billion with a B —  to that very program. Yet again just after releasing the proposal, on Twitter, where he splits his presidential time when he’s not at one of his lavish golf courses, he stated, “we will not be touching your Social Security or Medicare in Fiscal 2021 budget.”

The truth is in the proposal.

Affordable care for people with pre-existing conditions is also on the chopping block. According to the Department of Health and Human Services, nearly 130 million people in the United States have some type of pre-existing condition, and that doesn’t even include the elderly. Without the ACA, all those individuals would lose their health insurance coverage.

His bold-faced lies about how our money will be cut or spent aren’t new.

This is the same man who ran his campaign on having Mexico build a wall, only to turn around and ask U.S. taxpayers to fund something none of us want in the first place. His new budget threatens to take $3.8 billion from the Pentagon to pay for construction on a wall that’s meant to separate families, rather than coming up with a path forward on immigration that allows everyone to thrive.

But it’s not the lying that’s the worst of it. The true kicker is how this will impact our children and our parents.

As an African American mother of four who formerly relied on CHIP in the 90s to make sure my kids could go to the doctor when they were sick. And as the daughter of an aging mother who  uses pension-based retirement insurance supplemented by Medicare and still pays more than 25% of her income on healthcare just to live every day, I’m not only mad, I’m terrified.

Think of all the routine check-ups, school-required immunizations, prescriptions, X-rays, and dentist visits you’ve had to make sure your children got over the years. CHIP makes those visits to the doctor that prevent serious illnesses from taking over our families possible for the most vulnerable of us.

When I was a young mother putting in nine hours a day at an orthodontic factory in The San Gabriel Valley of Southern California while attending classes four nights a week, to obtain my first college degree and make a better life for my family, programs like CHIP, Women Infants and Children (WIC), and child care co operatives were how I eventually became self sufficient.

Calling a $193 billion cut to Medicaid and CHIP over the next 10 years “modernization” isn’t fooling anyone. The Trump Administration can call things what they want, but I see through the flip-flopping messages and know the Trump budget is just another policy that threatens people’s well-being, livelihood, and ability to care for their young. It’s a proposal that threatens all American families.