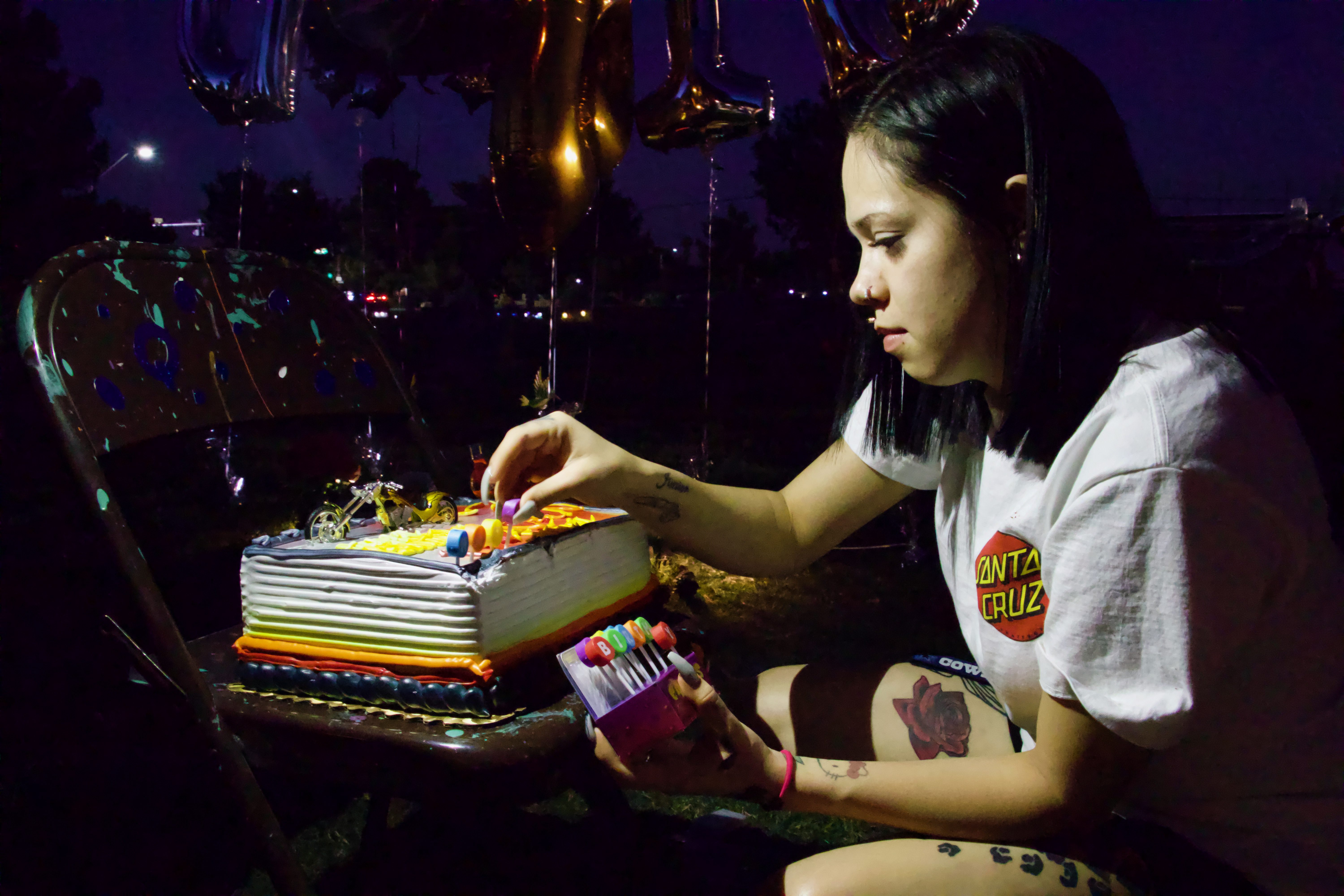 Amber Bustillos, fiancee of Junior Lopez, lights his birthday cake for what would have been his 23rd birthday, at his gravesite at Woodlawn Cemetary. Las Vegas, Nev., September 25, 2018.

Las Vegas, Nev. – Monday, September 25th, 2018, would have been the 23rd birthday of Junior David Lopez. He was a young man with wedding plans set for mid-May and was moving towards becoming a Las Vegas Metropolitan police officer, had he survived a simple traffic stop.


In the early morning of April 6th, Lopez was driving with his fiancee, Amber Bustillos, and their friend, Kimberly Gonzalez, when he was pulled over by Las Vegas Metropolitan Police Department for speeding down Madge Lane, a residential road that is often used as a shortcut to get to Bonanza Road.

Lopez had a pistol with him, which he was licensed to carry. According to Bustillos and Gonzalez, the officers yelled repeatedly at Lopez to get out of the car, and even used expletives to emphasize the seriousness of the stop. Rather than staying in the car, Lopez followed the commands by stepping out of the vehicle, and almost immediately after threw his hat and his gun onto the ground. A few days before, Lopez received an email confirming his next exam date with Metro to continue steps towards becoming a police officer.

What happened next was unthinkable to Lopez, Bustillos and Gonzalez. Both officers had their guns out pointed at Lopez, who was then ordered to get down on his knees. Lopez’ hands and arms were opened outwards, clearly showing that he was not aggressive. Bustillos recalls him shouting, “Don’t shoot me, don’t shoot me!” However, in the video captured by the officers’ bodycams, the phrase heard is, “Shoot me, shoot me!” Lopez then made a hand gesture, appearing to brush the gun (which was a few feet in front of him) away from his body, and as that happened both officers opened fire. Laying on the ground, Lopez gasped for air, and moments later moved onto his stomach, which the officers perceived as an aggressive move towards the gun and shot at him again. These final shots proved fatal.


And because of that traffic stop, Lopez’ 23rd birthday was commemorated without celebration. At Woodlawn Cemetery, at 7:00 p.m., located at the edge of Las Vegas Blvd., a major contrast from the skyscrapers and neon lights of the Las Vegas Strip, Lopez’ family and friends gathered to celebrate his birthday and remember his life. Around 25 friends and family of Lopez gathered by his grave, equipped with balloons, lawn chairs, homemade food and a birthday cake, and live music. The event was attended by Bustillos and her two young children who looked to Lopez as a father-figure.

“I got to see him everyday with my sister, notice who he was as a person,” said Luis Bustillos, brother of Amber Bustillos. “Little by little I got to see who he was. He was a great person. To this day, everyday, there’s not a day I can’t stop thinking about what happened… and what happened to my sister, you know, to experience that… to be put through that. It’s hard. It’s hard for her and it’s hard for everybody around. I’m so shocked to see him gone… he’s one of the people you don’t want to see gone. It’s sad.”


Currently, Lopez’ parents are in the process of filing a civil lawsuit against the Las Vegas Metropolitan Police Department (LVMPD).

Along with Lopez’ family, 11 other Las Vegas families will no longer be celebrating their loved ones’ birthdays. LVMPD has had 22 officer-involved shootings last year resulting in 12 fatalities, which is higher than their annual average. Despite LVMPD’s recent public relations campaign touting that they are the national model for police reform, Nevada is leading the country in police killings, ranking in 6th place. According to Mapping Police Violence, the average number of people killed by police per year between 2013-2017 in Nevada was 6.5 people. Last year alone, LVMPD has doubled the state average.

Welcome Home: Navigating the holidays without a home

“What are you and your son doing for the holidays?” This question, innocently asked, is an emotional minefield for me and families like mine across the country coping with homelessness. […]

When thinking about the American dream, we often believes that merit in equals results out—if you work hard enough, you deserve what you get. But is that always the case? […]

“He was very creative,” said Trinita Farmer about her son, Tashii Brown, during an interview in her home on March 4, 2018.  Farmer was eager to exhibit his work, which […]